Riboflavin supplement Vitamin B2 benefit and side effects by Ray Sahelian, M.D.
February 8 2016

Also called vitamin B2, this water-soluble member of the B-complex family of vitamins plays a crucial role in converting protein, fats, and carbohydrates into the energy that the body demands to grow and develop properly. For an excellent multivitamin with riboflavin and other B vitamins, see MultiVit Rx. If you have an interest in mental enhancement, consider Mind Power Rx.

Riboflavin (vitamin B2) is a yellow-colored nutrient involved in dozens of metabolic pathways leading to energy production and the making of fatty acids and sterols. Good sources are lean meats, eggs, milk, some vegetables and enriched cereals. The recommended daily intake of riboflavin iis about 1.5 mg. You may notice your urine turning a deeper yellow color after taking riboflavin.

Riboflavin is part of two larger activated coenzymes known as flavin adenine dinucleotide (FAD) and flavin mononucleotide (FMN). FMN is now available as a supplement. One product contains 25 mg of FMN per pill. Human studies giving FAD or FMN in order to evaluate cognitive functioning have not yet been published.

Migraine headache
Int J Vitam Nutr Res. 2015. Supplementation with Riboflavin (Vitamin B2) for Migraine Prophylaxis in Adults and Children: A Review. Migraine is a unilateral and pulsating headache associated with nausea, photophobia, vomiting, and sensitivity to light. Low vitamin B2 can lead to mitochondrial dysfunction and may have an effect on migraine pathogenesis. The aim of the present study was to carry out a review of existing evidence regarding the effects of riboflavin (vitamin B2) supplementation on migraine prophylaxis in adults and children. It seems that riboflavin is a safe and well-tolerated option for preventing migraine symptoms in adults, however, there is insufficient evidence to make recommendations regarding vitamin B2 as an adjunct therapy in adults and children with migraine. 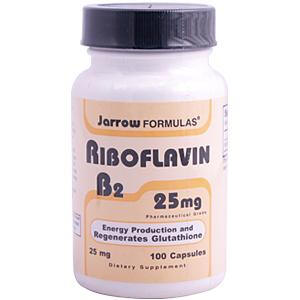 Buy Riboflavin B2 on sale

Riboflavin is an essential B vitamin typically found in meat, eggs, dairy and legumes. Riboflavin is utilized by the liver, brain, heart and other tissues to synthesize flavine mononucleotide (FMN) and flavine adenine dinucleotide (FAD), the active forms of riboflavin. FMN and FAD are cofactors for a variety of oxidative enzyme systems and function as electron carriers important for the synthesis of energy (ATP). FAD is also involved in the activation of folate, the metabolism of neutrotransmitters, and regeneration of reduced glutathione. Alcohol reduces digestion and absorption of riboflavin. Riboflavin also supports the metabolism of carbohydrates.

Suggested Use: Take 1 riboflavin capsule per day with a meal, or as directed by your qualified health consultant.