Cysteine and Methionine - Function in the body
The carbons and nitrogen for the synthesis of cysteine are provided by serine and the sulfur is provided by methionine. Serine reacts with homocysteine to form cystathionine. This reaction is catalyzed by cystathionine synthase. Cleavage of cystathionine by cystathionase produces cysteine and alpha ketoglutarate, which forms succinyl CoA via propionyl CoA. Since cysteine dreives its sulfur from teh essential amino acid methionine, cysteine becomes essential if it is low in the diet and the supply of mehtioninen is inadequate for cysteine synthesis. An adequate supply of of cysteine spares methionine, that is, it decreases the amount of methionine that must be degrades to produce cysteine. When cysteine is degraded, the nitrogen is converted to urea, the carbons to pyruvate, and the sulfur to sulfate, which is excreted in the urine.

Benefits
At this time I am not fully clear for which clinical conditions l methionine supplementation would be of definitive benefit. I need to see many more studies to know how useful this amino acid can be when used as a single supplement.

Research
Transplant Proc. 2013 June. Higher serum methionine levels as a predictive factor in patients with irreversible fulminant hepatic failure. Fulminant hepatic failure (FHF) which is characterized by acute massive liver necrosis in the absence of chronic liver disease, shows an imbalance of amino acid levels resulting from acute hepatocyte necrosis.  The markedly increased serum levels of methionine may be associated with the severity of liver damage, which could lead to impaired liver regeneration and multiple organ failure among FHF patients.

Methionine oxidation and aging.
Biochim Biophys Acta. 2005.
It is well established that many amino acid residues of proteins are susceptible to oxidation by various forms of reactive oxygen species (ROS), and that oxidatively modified proteins accumulate during aging, oxidative stress, and in a number of age-related diseases. Methionine residues and cysteine residues of proteins are particularly sensitive to oxidation by ROS. However, unlike oxidation of other amino acid residues, the oxidation of these sulfur amino acids is reversible. Oxidation of methionine residues leads to the formation of both R- and S-stereoisomers of methionine sulfoxide. We summarize here results of studies, by many workers, showing that the methionine sulfoxide content of proteins increases with age in a number of different aging models, including replicative senescence and erythrocyte aging, but not in mouse tissues during aging. Aging is associated with a loss of methionine sulfoxide reductase activities in a number of animal tissues, and mutations in mice leading to a decrease in the Msr levels lead to a decrease in the maximum life span, whereas overexpression of methionine sulfoxide reductase leads to a dramatic increase in the maximum life span.

Questions
Q. Hi, I would like to ask why on your website you don't mention methionine as one way to increase SAM-e levels? You mention that TMG should help and I agree. But SAM-e is supposedly synthesized primarily out of methionine. Is it
because increased homocysteine levels associated with methionine supplementation?
A. This is a good question, we just don't have enough experience and knowledge on the interaction with methionine supplmentation and its influence on SAM-e to say much at this time.

Q. Can a methionine supplement be used the same day as curcumin or the herb saw palmetto extract?
A. I don't see why not.

I am currently being treated for undermethylation by a GP in London who also has a side-interest in alternative medicine. After postulating that i had high histamine levels via a questionnaire supplied by the Pfeiffer institute, as well as conducting a blood test which confirmed as much, i was assigned to take each morning 2 x L-Methionine (500mg), p5p, Cal/Mag, vit C 500mg, and each evening 2x L-Methoinine (500mg), chelated zinc, cal/mag, vit C 500mg. Unfortunately, since this is the only doctor i've come across in my area interested in treating histamine levels, it's difficult to cross-check facts, which is why I have e-mailed you. My questions are as follows: i was told that it did not matter whether i take the L-Methionine on an empty stomach. i was under the impression that all amino acids needed to be taken in such a state in order to maximise absorption; unfortunately, if i do take the l-methoinine first thing upon waking i experience side effects of intense feelings of nausea. However, these symptoms fail to appear (or are tempered at least) if i take the l-methionine after a meal. Do you agree that it's okay to take the L-methionine with food? I am experiencing intense feelings of anger and frustration ever since coming off Nardil. it's been 2 weeks since i discontinued the medication (after 6 weeks at a dose of 75mg), and this lack of emotional resiliency has yet to abate. Do you see any potential way in which L-methionine might be aggravating these symptoms since i know that SAM-e pills can be quite activating? if so, would another methyl donor like TMG or maybe even SAM-e viably be able to 'take the place' of L-methionine in this regime?
Not enough human studies with l methionine supplements have been done to determine whether it is better to take it on an empty stomach or with food. Most amino acids are more effective when used on an empty stomach. As a physician I treat the whole person as opposed to specifically trying to influence levels of one or two blood study results. It is difficult to predict a person's response to the other supplements you mention without giving them a try.

I tried a TMG and methionine supplement together two days ago and got one of the worst headaches I've had in a while and no other effect. I realize it probably takes a few days to kick in but it made me feel so ill that I am not going to take it again for a while. I'm continuing to take the DMG with good results although I hurt my back recently and it doesn't seem to help the pain much - I am only taking one sublingual pill a day of 125 mg so I may try more but I'm afraid it will keep me up if I do. I will probably try the TMG / methionine again when my back is better but not sure - it really did have a weird effect on me.

Source Naturals L-Methionine supplement, 3.53 oz (100 grams)
L-Methionine is an essential sulfur-containing, free-form amino acid. It contributes to the synthesis of S-adenosyl-Lmethionine (SAMe), which is necessary for normal brain function, and L-cysteine, which is a component of glutathione, an important antioxidant molecule in the body. It is also a transporter of the antioxidant mineral, selenium. 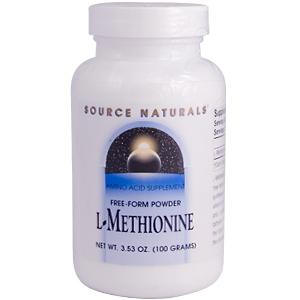 Suggested Use: 1/4 to half teaspoon of L Methionine amino acid powder between meals, or as recommended by your health care professional. If you experience stomach irritation, take with meals.